by Christoph Niehus in Blog 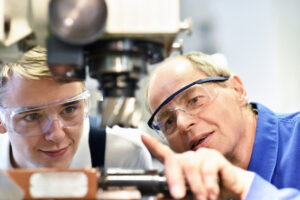 The ZDF’s heute journal of 30.07.2020 featured Bernd Mosebach’s report on the topic of “training in the coronavirus crisis“. The focus was on the annual challenge of bringing together prospective apprentices with training companies to increase the number of training agreements. It is undisputed that a number of reasons can prevent training agreements from being signed. One of the most important, however, is the failure of the market: there is an information gap between the two groups, which is why young people and company representatives are systematically unable to find each other. This is also why they are unable to exchange information with the other side and coordinate their behaviour. Eventually, they are unable to prepare and conclude a training agreement.

Each year, the Chambers of Industry and Commerce present a dramatic picture of the training gap. Each year, they then take the same and obviously time-honoured measures to alleviate the effects of the problem. They distribute “nifty posters” (heute journal calls them “flotte Plakate” in German), have colourful brochures printed, organize job fairs for apprenticeships, and the Chambers’ advisors try to put young people in touch with companies. “Go ahead and give them a call, young man.”

Plant manager Carsten Malschofsky from Schoeller Allibert speaks into the camera: “We can only overcome the shortage of skilled workers … by our own efforts.” As I understand it, he means that the measures taken by the Chambers of Industry and Commerce are not effective enough. In fact, the vast majority of instructors and the Chamber staff who “advise” the trainees have never worked in a company themselves. They have chosen a different career path (which is also an important one). However, then of course we cannot expect them to close the training gap in the 21st century simply with nifty posters and advising sessions or the limited opportunities for career guidance in schools!

Nevertheless, the Chambers of Industry and Commerce will report back later to inform the public of the enormous success of their initiatives. The bottom line: if we hadn’t taken action, things would have been much worse now and the shortage of skilled workers would have long since become the biggest obstacle to growth in the country. Good thing we are here! PS: hopefully nobody ever comes up with the idea of changing that! The reports, press releases and speeches of the Chambers on this topic always read the same, obviously often only a few terms and figures are adjusted. It also remains unclear which aspects of the good news are actually due to the work of the Chambers, because after all, companies, young people, parents, schools, and employment agencies also play a vital role.

In institutional economic terms, the parties involved are struggling to eliminate information asymmetries in order to alleviate the market failure that massively limits their options. Why not offer them a modern IT solution?

“… this year, too, thousands of training places in the country will remain unfilled”, says the heute journal narrator, reporting from Schwerin. However, the phenomenon is not limited to that area, it is the case throughout Germany. An enormous effort is being made in 80 Chambers of Industry and Commerce nationwide to close the training gap. All this is financed with the mandatory fees of the statutory members. The success is only moderate. Why has this been being done again and again and for years if it does not have the desired effect? Sure, the training gap would be even greater. But who has the greatest interest in settling for this weak argument?

Do the Chambers of Industry and Commerce have new and better ideas to reduce the information problem outlined above? If so, why can’t we identify them? Are they looking forward to testing new processing methods in the interest of the economy for more training? Are they melting pots of innovation and risk-taking on the subject of training? Have they seriously considered the possibilities of digitization and used them effectively to overcome the failure of the market? Or do they not contribute ideas, but rather cling to what is already there because it is easier and more convenient for them?

The Chambers of Industry and Commerce could combat the training gap much more effectively with digital methods that are new to them, but are probably refraining from doing so for selfish reasons. They cling to the issue of training, but ignore the fact that they could use the available resources much more effectively in the interests of the economy and to alleviate the problem. However, if they do not discuss and try out new ways of doing things, and do not seek advice on this, they end up doing so at the expense of the economy. Perhaps the problem is not as serious as it is presented? What could lead the Chambers to fundamentally revamp their methodologies? The market mechanism! But unfortunately, the Chambers of Industry and Commerce are not in competition with anyone else. At the same time they are protected by law. All that remains is: the economy itself! Perhaps in the long term it could motivate the Chambers to take a different course. However, that is far from certain, because the influence of the economy on its own lobbyist is limited in practice.

The “advisors” of the Chambers are not even able to offer advice on the myriad of continually developing occupations out there. But the employees in the companies can. They are the ones who have the information that trainees are interested in. The companies can give them detailed insight into the training courses in their companies and answer most of the questions on this subject more accurately than anyone else.

So we need a system that brings trainees, trainers or other representatives of companies into direct contact with pupils. – Not only when they go to school, but whenever those involved want to do so and there is a need for information on apprenticeship occupations on the part of the students or offers from companies. Job fairs are good, but a training market that is as frictionless as possible, active all year round and open is far better! The speaker in the heute journal report also states: “It is important to talk directly to people interested in the occupation so that they can understand it.” But that is possible with low barriers!

The number of stakeholders involved is too large, and their interests are too different for the Chambers of Industry and Commerce to coordinate this centrally. However, with a smartphone app, a match could easily be made at any time.

In order to make a contribution to IT-supported “matching” via detailed interests on training, occupations, and companies between the two groups in the regions, or at least to initiate discussion, we have proposed a modern solution to the Chambers via a smartphone app. The DIHK in Berlin and the Chambers of Industry and Commerce did not even react to this! Then we summarized our proposal in this video (in October 2018):

A new state-of-the-art IT system would probably be so successful in resolving the information problem between the pupils and company representatives that the traditional measures of the Chambers of Industry and Commerce could be phased out gradually. To the great detriment of young people and the economy, this seems to be something that they are seeking to avoid at all costs.

These considerations are also available for use by the editorial staff of heute journal.

We use cookies on our website to give you the most relevant experience by remembering your preferences and repeat visits. By clicking “Accept”, you consent to the use of ALL the cookies. However you may visit Cookie Settings to provide a controlled consent.
Privacy policyCookie settings
REJECTACCEPT